« Back to Blog, Tips

The season of colds and flu is rapidly approaching and for many people it seems to have already arrived!

I was laying in bed just over a week ago thinking it had been about a year since I had caught a cold – which I assumed was due to the amount of garlic I eat. Then 4 days later, along came a sore throat and headache with turned into a cold… I had spoken too soon!

I had a tub of Burt’s Bees hand salve rolling around in a drawer which I had bought a while ago. I didn’t really enjoy using it as a hand salve because it was a bit too oily, but I decided I’d keep hold of it in case I found any other uses for it. It is olive and almond oil based and contains lavender, rosemary and eucalyptus oils. The scent is quite strong but smells like a milder version of products like Vaporub and Olbas.

So I thought that as it was just sitting in a drawer and contained eucalyptus, I would give it a go as a cold remedy! I rubbed some onto a tissue and onto my chest before bed and it worked brilliantly at 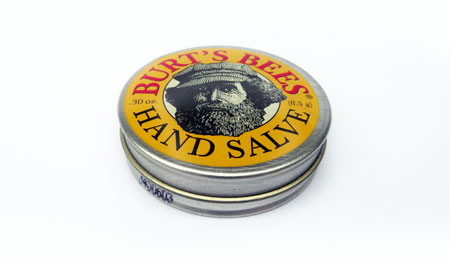 clearing my nose. I also tried putting some in hot water which produced a mild vapour – a blob of hand salve doesn’t dissolve as well as a drop of oil, but still works well.

So if you have a tub of Burt’s Bees Hand Salve, give this a go next time you get a cold.

You may also like: Book Review: Grow Your Own Drugs Back to top ↑