Neal’s yard Remedies was founded in 1981 by Romy Fraser with the aim to bring alternative medicine and natural remedies together in one shop.

Her exposure to alternative medicine was part of the way she was bought up – instead of antibiotics for a cold, she would be given cinnamon tea. She developed more of an interest in these areas after seeing someone cut themself badly. Marigold leaves were applied to the wound and before they had reached the hospital, it had healed. It was this experience that motivated her research into homeopathy.

Her original goal was to set up a school and she had started to draw out plans to open up a school of her own.

“I wanted to set up a school that would demonstrate how a good education could be a healthy education”.

The one thing she lacked was funding.

In 1981, she received a call from a friend who ran Neal’s Yard Wholefoods and asked her if she wanted to open an alternative pharmacy in part of the shop. They offered her an £18,000 loan which she accepted and opened her first shop in Covent Garden selling shampoos, creams, essential oils and herbs. All of the products were made, packaging and labelled in the back of the shop. 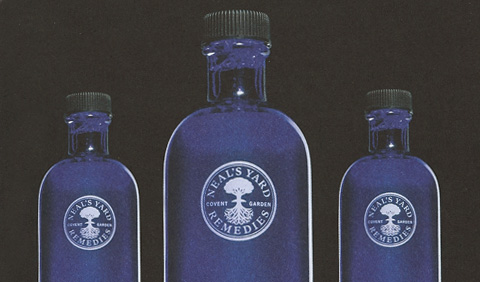 Soon after starting the company she bought an old factory in a builders yard to help meet demands for the products. More and more Neal’s Yard stores gradually opened when she persuaded people who worked in hers to set up their own. As this happened, they inevitably started to outgrow the factory, so in 1995 they moved to a purpose built eco-factory at Peacemarsh (near Gillingham, Dorset). In the same year, they partnered with the owners of Sheepdrove Organic Farm which gave them enough land for them to grow a very large percentage of the ingredients they used in their products.

Neal’s Yard has grown to 23 shops: 14 are company owned and the rest are franchised. As well as selling alternative medicines and herbal remedies, they run natural remedy courses and workshops for the public. 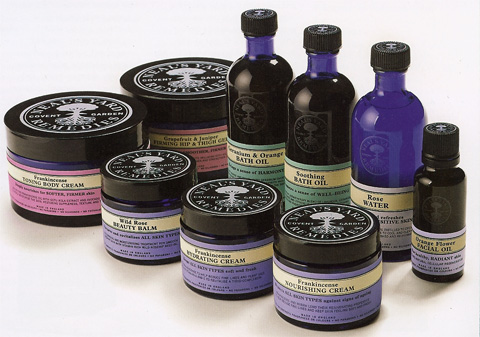 Many of the ingredients Neal’s Yard use are certified Organic by the Soil Association. The plants, herbs and flowers are grown on a farm in Gillingham Dorset.

Cruelty free – No Neal’s Yard products or ingredients have been tested on animals. In 2005, Neal’s Yard received the Alternative Award and a Golden Rabbit from BUAV for it’s ethical treatment of animals.

Working with charities and organisations – Neal’s Yard want to promoted improved wellbeing and a healthier environment in their work with the following campaign groups: The Samaritans, Trade, No More Breast Cancer, Foresight, Friends Of The Earth and the Women’s Environmental Network.

Carbon Neutral – They are the first high street retailer to be certified carbon neutral by the Carbon Neutral Company. Their plans for 2008 include:

Bottles and jars: Neal’s Yard products are packaged in blue glass bottles, which over time have become a signature style. These bottles look nice but also ensure the products isn’t damaged by blocking out 97% of sunlight (which can damage natural colours and herbal properties).

In June this year, Neal’s launched a new range of packaging using British jars. The jars are made from Scottish sand, Yorkshire limestone and Cheshire Soda Ash

Labelling: There has been growing debate about the amount of organic content required in order for something to be called an ‘organic product’. Neal’s Yard have therefore developed a labelling system to show consumers the percentage of organic materials each product contains.

Postage: The packaging chips they use to protect products from the online shop are biodegradable, so you can place them on your compost or in with your food recycling.

Responsibility for packaging waste: You can take empty jars and bottles back to the shop to be recycled and in return they give you 10p for each one. It’s not the fact that they give you 10p that great (you’d need alot of 10p’s to buy a new jar of face cream!), it’s the fact that they keep it there responsibility even though they have made the sale and got your money in their pockets.

You may also like: Aubrey Organics Back to top ↑